Terror attacks, political instability and global warming. News are dropping like bombshells these days but a new book tries to convince us that things were not necessarily better in the old days. Guido Mingels’ “Früher war alles schlechter. Warum es uns trotz Kriegen, Krankheiten und Katastrophen immer besser geht” features dozens of graphics and charts as well as short informative texts regarding current developments that really matter. The author underlines that the number of people killed by malaria declined by 60 per cent between 2000 and 2016. The overall number of murders and war victims is decreasing as well while life expectancy rises steadily. Michael Walter and Lisa Rost created the diagrams for a book which should be ignored by those who seek the solace of nostalgia.

One of the most popular Bundesliga coaches of the past 25 years has presented his autobiography. Fans have admired Huub Stevens’ passionate approach to the game and his unapologetic attitude. His mentality – strict and autocratic, self-confident and passionate – has caused controversy at times while certain statements during interviews produced laughs and headlines. The Dutchman had moderate success in domestic football before becoming a hero at Schalke 04 by winning the UEFA Cup in 1997. Finishing the Bundesliga in second place after Bayern’s buzzer beater triumph was a traumatic turning point in his career which also included assignments at Hertha BSC, Hamburger SV and Red Bull Salzburg. In “Niemals aufgeben”, Stevens and co-author Bert Nederlof, a former Voetbal International editor in chief, do not just reflect on success and defeat on the pitch. The book also informs on personal aspects such as health issues and true friendship in the tough international football business.

Businessmen may consider taking the plane just as an effective way to travel featuring as few disruptive elements as possible. Holidaymakers probably look back in horror on nerve-wrecking delays or even cancellations. 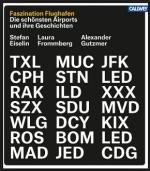 “Faszination Flughafen. Die schönsten Airports und ihre Geschichten” proves that there is so much more to it. On almost 200 pages, aeroTELEGRAPH chief editors Laura Frommberg and Stefan Eiselin and media and communication lecturer Alexander Gutzmer portray some of the most remarkable airports in the world.

Their publication does not just contain great essays about important hubs like John F. Kennedy Airport with its 53 million annual passengers or Charles de Gaulle just outside Paris with its iconic concrete design which started operating in 1974. The authors also focus on various significant characteristics like the brightly coloured tower designed by Fermin Vazquez at Lleida Airport.

Apart from fantastic photos, “Faszination Flughafen” serves up astonishing facts such as the answer to the question why on earth not a single passenger has ever used Spaceport America in New Mexico.

His critics outline that corruption is growing in leaps and bounds. Economists say he must stop his deficit-ballooning fiscal policies and downsize the

lavish welfare state created to win over voters who never supported Fidesz before. Political analysts criticise him for displaying fare more extreme positions than Jobbik, the country’s fascist party. Human rights activists stress that the government is doing nothing against self-styled militia units formed by far-right activists to intimidate Roma.

Paul Lendvai is analysing the most controversial aspects of Viktor Orban’s impressive rise. In his new book, the renowned journalist – who underlines in his foreword that he feels “committed to Austria with every fibre of my body” – tells from the astonishing political career of the internationally disputed Hungarian prime minister who seems more confident than ever as far as support by the electorate is concerned.

“Orbans Ungarn” informs on Orban’s youth on the countryside, first political experiences as a student and his famous 1989 speech.

Lendvai – who left Hungary in 1957 as “I was enabled by Austria to live a life in freedom” – is surely not sugarcoating developments in Hungary since Orban first took over as head of the government almost 20 years ago. However, the author also acknowledges the prime minister’s political talent and determination. He not only focuses on measures carried out by the Orban administration but also portrays his most loyal allies and greatest rivals – from Gabor Fodor to Laszlo Köver and Ferenc Gyurcsany. Various aspects of life in Hungary and important changes in society and economy – from the brain drain, as more and more young Hungarians leave to work and study in Austria, Germany and the United Kingdom, to domestic companies’ weak international competitiveness.

Orban recently expressed his ambition to remain in politics for the next 15 or 20 years. Lendvai underlines the economic downturn Hungary has gone through since Orban’s Fidesz is in charge – despite claims by the prime minister that he got the country back on track.

SK Rapid’s next home game will take place in a sold-out stadium as the club gave away thousands of tickets to members for free.

Around 28,000 fans are expected to attend the Bundesliga fixture against SKN St. Pölten tomorrow (Sat, 6.30pm). St. Pölten are under immense pressure as the Lower Austrian team garnered just two points in the current season.

Club bosses recently hired former Admira manager Oliver Lederer. He succeeded Jochen Fallmann who stepped down in a move which has been described as a successful attempt to avoid his sacking.

Earlier this week, Rapid coach Goran Djuricin expressed relief as midfielder Tamas Szanto was back on track. Szanto performed for his club in a friendly against amateur side Zwentendorf after several months of rehabilitation. Rapid celebrated a 10-0 victory.

Rapid are currently in fourth. The Green-Whites beat Mattersburg 1-0 away from home while St. Pölten were crushed by leaders SK Sturm (0-3).

The Bundesliga after 10 of 36 rounds:

“Brot & Spiele. Cartoons & Karikaturen” is packed with hilarious sport-themed cartoons by popular artists especially from Germany and Austria. The Holzbaum publication features caricatures created by Markus Grolik from Munich and Teja Fischer whose artworks have been featured in Titanic, Stern and other magazines. Harm Bengen, Ari Plikat and Stephan Rürup are featured as well. This 100-page release is part of Holzbaum’s rich selection of entertainment literature. The Viennese publishing house previously presented “Vegane Cartoons”, “Wie kommt der Parmesan in die Tastatur?” and many other cartoon collections.

Batman, Iron Man, Fantastic Four – trademark superheroes are drawing the crowds at cinemas these days. But how did it all start? Dietmar Dath, a devoted comics fan, describes the first steps of pioneering authors at DC and Marvel but also portrays the American society and US media of their era. Furthermore, the author analyses genres such as science fiction, fantasy and supernatural horror. All of this occurs on just 100 pages as “Superhelden” is part of Reclam’s compact facts series. Unfortunately, the concept does not work out this time – unlike Reclam’s 100-page John F. Kennedy biography. Since Dath also considers sociological and philosophical aspects concerning comics, a meagre 100 pages are just not enough to create a reasonable overview on this fascinating art.