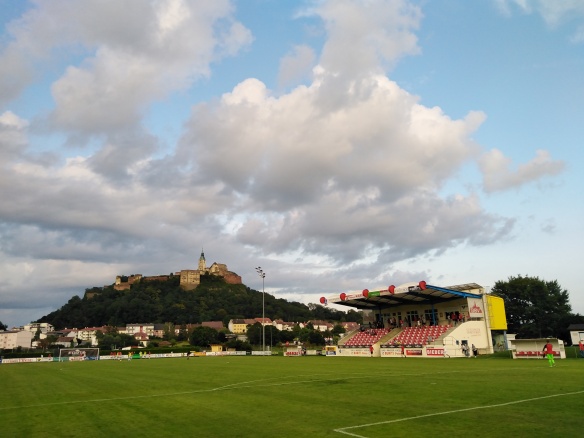 Having replaced midfielder Christoph Knasmüllner in the 81st minute, Kara equalised the score in a spine-tingling finish to a turbulent match.

“Finding the net in the first appearance for my new club feels great. I’d be even more emotional had I scored in a home fixture,” the 24-year-old forward said after Rapid’s 2-2 in Hartberg on Sunday.

Endowed with great stamina, Kara now might want to convince his coach that he is more than just an amazing asset to have off the bench.

Kara joined the Bundesliga side from second-league club SV Horn during the winter break. Having made an instant impression, he could find himself in Rapid’s starting eleven against Mattersburg next Sunday (5pm, Allianz Stadion).

WSG Tirol have secured the services of two former Rapid stars just days ahead of their encounter with the Viennese club.

Thanos Petsos – a battle-hardened central midfielder – signed on the dotted line as well as ex-national team striker Stefan Maierhofer. Aged 37, Maierhofer is unlikely to bring much-needed pace. But club officials are confident that his international experience and winning mentality will be beneficial to the squad.

The bottom club face Rapid at the Allianz Stadion in Vienna at 5pm on Sunday as the Bundesliga returns from its nine-week winter break.

Meanwhile Rapid (pictured: the team’s 4-1 win over Wiener Neustadt) look back on a series of mediocre results during the cold period. Currently third in the league, the Green-Whites won just two of their seven friendly matches. The team of Dietmar Kühbauer suffered defeats against FK Vojvodina and Levski Sofia. Last Saturday, Rapid achieved only a 1-1 against struggling second-league side SV Horn.

Vienna’s top-flight clubs have celebrated impressive wins ahead of the fiercely anticipated derby.

The Green-Whites ripped vice champions LASK Linz into pieces last Sunday (0-4). Returning from a lengthy absence due to injury, Srdjan Grahovac has added much-needed stability to Rapid’s defending midfield. Taxiarchis Fountas will certainly pose an intimidating threat to FK Austria’s back-four. Coming from the subs’ bench to score the final goal of the match last Sunday, Aliou Badji might have regained some self-confidence.

FK Austria’s stunning 5-0 triumph over Hartberg might have broken the psychological barrier in the heads of some insecure players. The opportunity of revenge should now sharpen their focus.

Sturm Graz are at risk of not making it into the championship playoff. Now they face an improved Rapid.

After having won just two of their last five matches, Sturm find themselves in fifth place. The first six clubs of the 12-team Bundesliga will fight for the title in spring.

The three-time Bundesliga champions are up against Rapid at Vienna’s Allianz Stadion on Sunday (5pm). The Dietmar Kühbauer side want to build on their superb 3-0 away win at Altach and a successful friendly encounter with second-division outfit Blau-Weiß Linz during the international break (2-1).

At fourth-placed Rapid, the comeback of Srdjan Grahovac has certainly applied some pressure to Dejan Ljubicic’s starting-eleven spot.

The most recent clash between Sturm and Rapid dates back to mid-August when Rapid celebrated a narrow but deserved 1-0 victory in Graz.

Red Bull Salzburg have sent a clear message to their fiercest rivals with another win against Rapid.

The Bulls’ 3-2 in front of more than 17,000 spectators on Sunday ensures a comfortable three-point lead ahead of LASK. Rapid are now in fourth, three points behind Europa League hopefuls WAC who failed to beat struggling Admira (2-2).

The Green-Whites have most recently beaten Mattersburg away from home after achieving just a 3-3 draw against Hartberg thanks to captain Stefan Schwab’s last-minute equaliser.

Now the league returns and WAC hope to play as well as the Austrian national team. The Carinthian side face Rapid in Vienna on Sunday (Allianz Stadion, 5pm). WAC are currently in third place in the 12-team Bundesliga, just one point behind Rapid.

But the Kühbauer side must not underestimate their upcoming opponents. WAC caused a stir in the Europa League. They snatched one point against AS Roma after having mercilessly crushed German Bundesliga leaders Borussia Mönchengladbach away from home (0-4).